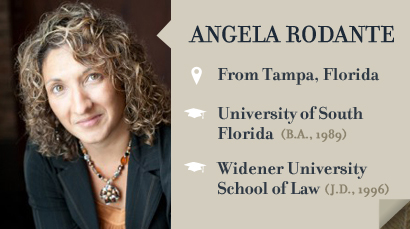 We are pleased to share that Managing Partner Angela Rodante will participate as a mentor at the Tampa Bay Business Journal’s Bizwomen Mentoring Monday Event being held on April 7th at the Metropolitan Ministries’ Welcome Center from 8am-10am.

With a total of 40 local mentors, Ms. Rodante will engage in one-on-one coaching sessions with event attendees. During each session, she will offer powerful insight and advice through her experience as a business leader in the Tampa Bay Area.

An advocate for those who have been injured or wronged by insurance companies, Ms. Rodante has devoted nearly 25 years to helping achieve a fair and just outcome for clients. Her history with the firm reveals her drive as a business woman. She actually began with Swope, Rodante P.A. in 1985 as a runner, returned as a legal secretary, and later as a law clerk. After earning her Juris Doctor from Widener University School of Law, she returned to the firm as an associate attorney in 1997 and became a partner in 2003.

An active community leader, Ms. Rodante sits on the The Ybor City Chamber of Commerce’s Board of Directors, she has served on the Board of Directors for The Tampa Bay Trial Lawyers Association, and is an active member of L’Unione Italiana and Centro Asturiano de Tampa Clubs, among other organizations.

How:       Visit TBBJEvents.com for ticket information.