Congratulations to AnnaGrace Brackin on being selected as November’s Swope Rodante Vanguard Award winner.  Swope, Rodante Founding Partner, Dale Swope presented the award to a shocked AnnaGrace who was surprised during a special ceremony held a Blake High School on Friday afternoon where family, friends, teammates and Blake teachers and faculty cheered her on.

A truly remarkable student athlete, AnnaGrace has excelled academically earning a 6.98 GPA while at the same time gaining recognition for her numerous athletic accomplishments including earning her 3rd degree black belt in Kukiwon, being recognized as Blake High School’s Outstanding Swimmer for the 2018 Season, and winning a Silver Medal at the West District Championships for rowing. AnnaGrace was also a member of the relay team that broke the school record for Girls 200 Freestyle Relay and 400 Freestyle Relay. Her awards within martial arts include multiple state, national and international titles and she’s also had the unique opportunity to train at USA’s Olympic Facility her Freshman year.

Coming into her Senior year of high school, AnnaGrace had to cope with physical challenges due to a knee injury and a broken ankle she sustained while attending Harvard’s Pre-College Program. These injuries limited her ability to train for the season; however, despite not being able to swim AnnaGrace always showed up for practice, motivating her fellow teammates. 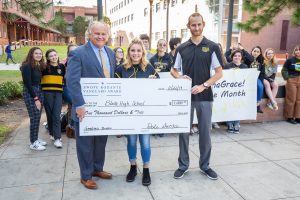 With a genuine heart for service, AnnaGrace dedicates her time and energy to numerous organizations and is the Co-Founder of Grace’s HOPE (benefiting children with epilepsy) which was established in 2010. She tutors at Cyrus Green Recreation Center and volunteers with Southeastern Guide Dogs, National Arts Honors Society, PTSA, NHS and Feeding Tampa Bay.  To date she has accumulated over 1500 hours of community service. AnnaGrace has earned numerous awards for her service to the community including the Kid’s Are Heroes Award, a distinction presented by Senator Bill Nelson, the International Day of Peace Award, and the President’s Lifetime Achievement Award for Volunteer Service.