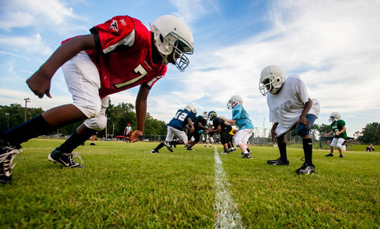 The National Institutes of Health (NIH) and the National Football League (NFL) are combining efforts to advance research on the effects of traumatic brain injuries (TBI). The league is paying $12 million of an allocated $14 million for research, the rest of which will be funded by the NIH. The $14 million comes from $30 million in research funding the NFL made available to the NIH for research in 2012.

The research will not focus only on football players, but any people who may have suffered head injuries from other activities. The NIH announced on December 16th that it plans to fund eight projects designed to look at the long-term effects of repeated head injuries and how to improve concussion diagnosis. Story Landis, director of the National Institute of Neurological Disorders and Stroke (NINDS) which is part of NIH, said in a press release:

“We need to be able to predict which patterns of injury are rapidly reversible and which are not. This program will help researchers get closer to answering some of the important questions about concussion for our youth who play sports and their parents.”

Two separate studies will receive $6 million each in funding. They will look at how the brain changes over time after a person sustains a head injury or multiple concussions. Researchers will specifically look at brain scans and changes in brain tissue with the hope that these techniques will lead to a definitive way to diagnose early warning indicators of chronic traumatic encephalopathy (CTE) in living individuals.

The degenerative brain disease, CTE, has been linked to repeated traumatic brain injuries, has previously only been diagnosed after death. Patients who suffer from CTE often exhibit severe Alzheimer’s-like symptoms like memory loss, mood swings, cognitive issues, depression confusion, aggressive behavior and problems with motor skills. Ex-NFL player Junior Seau and ex-MLB player Ryan Freel were both diagnosed with CTE after they committed suicide. UCLA researchers recently announced that they had developed testing to diagnose CTE in living patients, including NFL Hall of Fame running back Tony Dorsett, but those tests are still preliminary and also pending FDA approval.

The first research project will focus on creating guidelines for determining the different stages of CTE, so doctors can use them to diagnose living patients who have experienced multiple concussions or prior brain injuries. The project also aims to identify the specific traits that make the disease different from other degenerative brain diseases, such as Alzheimer’s and amyotrophic lateral sclerosis (ALS, or Lou Gehrig’s disease). The second project will focus on the long-term symptoms of mild, moderate and severe traumatic brain injuries and how they might be similar to CTE.

Six seperate studies will run for about 2 years and will focus on sports-related concussion research, especially since the science of diagnosing concussions still isn’t exact. They may be expanded into larger studies in the future.

The funding is provided by the Sports and Health Research Program, a collaboration of the NIH, the NFL, and the Foundation for the National Institutes of Health (FNIH). The NFL previously donated $30 million to the FNIH towards looking into how injuries affected players, with a special focus on traumatic brain injury and concussions.