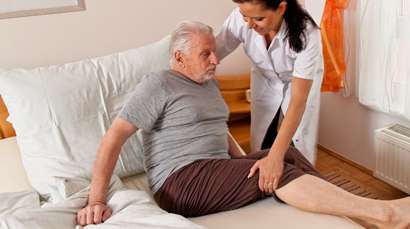 When families decide to rely on nursing homes for their relatives’ long-term care, they trust that caretakers will be well-equipped to handle their relatives’ medical problems or disabilities.

Perhaps the most pervasive form of nursing home abuse is neglect, which occurs when a caregiver does not take proper care of an elder’s physical needs such as food, water, medication, or hygiene. Nursing home neglect may not necessarily be intentional, but instead caused by underfunding, under-staffing or poorly trained staff. Whether intentional or not, neglect can cause serious harm or drastically worsen a chronic illness.

Nursing home abuse may also take on many other forms including physical abuse, emotional or psychological abuse, and sexual assault and abuse. If you suspect that your loved one has been abused, then you can start by addressing these concerns with the administrator of the home or you may want to consult directly with an attorney who has experience handling nursing home abuse cases.

Whether the problem is with one or two employees or systemic, if you fail to get a satisfactory response from the administration, then you may want to file a complaint with the appropriate state agency. In Florida, you may contact the Florida Agency for Health Care Administration to file a complaint about a nursing home at 888-419-3456  or visit their website.

A civil personal injury lawsuit may also be filed to recover [financial compensation] for damages including bodily injury, psychological and mental suffering due to the abuse. Experienced personal injury attorneys, such as those at Swope, Rodante P.A., can discuss your legal options. To speak with someone about your case, please contact us.

Disturbingly, nursing home abuse occurs all too often. A 2001 Congressional report prepared for Rep. Henry A. Waxman which investigated the incidence of physical, sexual and verbal abuse, found that 5,283 nursing homes –almost one out of every three –were cited for an abuse violation in the two-year period from Jan. 1, 1999 through Jan. 1, 2001. All violations had at least the potential to harm the residents, and in over 1,600 of the homes, the abuse was serious enough to cause actual harm or to place the residents in immediate jeopardy of death or serious injury.

Americans are living longer, with fewer deaths from heart disease and cancer, but with more chronic illnesses, according to America’s Health Rankings’ assessment of the nation’s health on a state-by-state basis, sponsored by the not-for-profit United Health Foundation. This may help explain why about 91 percent of the 1,650,000 U.S. nursing home residents are over age 65.

The Other Nine Percent

The Sunshine state, of course, has its share of elderly retirees in nursing homes, but surprisingly there is also a much younger population – about 220 children – there too. The Miami Herald came out against the practice of “warehousing” disabled children at senior nursing homes in a Feb. 7 editorial. The editorial pointed to Golden Glades Nursing & Rehabilitation Center in Miami Gardens, where two teens, Marie Freyre and Bryan Louzada, died, as an example of why this practice has to stop. The girl died hours after arriving, after caregivers failed to give her life-saving anti-seizure drugs. The Miami Gardens nursing home was fined $300,000 by federal regulators after her death, but in their opinion that doesn’t solve the tragedy.

Young people, ages 31 to 64, also make up a growing segment of the nursing home population, a 2010 special series report by Joseph Shapiro, a NPR News Investigations correspondent, shows. It explains that a reason may be record budget cuts to programs that help people live at home.

State and federal laws protect nursing home residents’ rights to be treated with dignity.  Florida statute § 400.022 provides a list of “residents’ rights.” A few of the rights listed include: the right to civil and religious liberties, private and uncensored communication, the right to examine their own medical records, and the right to have their families meet in the facilities.  Under 42 U.S. Code §1396r –Requirements for nursing facilities – a “nursing facility” must develop a written plan “to provide services and activities to attain or maintain the highest practicable physical, mental and psychosocial well-being of each resident.”

This federal code also includes: “The right to be free from physical or mental abuse, corporal punishment, involuntary seclusion, and any physical or chemical restraints imposed for purposes of discipline or convenience and not required to treat the resident’s medical symptoms.”

What You Can Do

Signs of abuse or neglect might include things like foul odors, dirty bed sheets, bruises, or even something as simple as keeping a water glass out of the resident’s reach since dehydration can be life-threatening.

Other signs to watch out for include:
• Emotional signs such as the resident being withdrawn.
• Environmental hazards on the grounds such as slippery floors that may cause falls.
• Poorly-sized mattresses that may result in injury due to falling between a bed frame.
• Pressure sores or bedsores can develop when a resident is left laying or sleeping or sitting in the same position for long periods of time. Find out what your facility does to prevent pressure sores and document if those procedures aren’t followed.

It’s important to document everything including any pictures of physical abuse, the date at which you began to suspect abuse, any response that was given, and any action taken by management. Documentation will help you in the event you decide to pursue legal action against the facility.