Australian Medics plead for ban on boxing as fighter dies after fight. 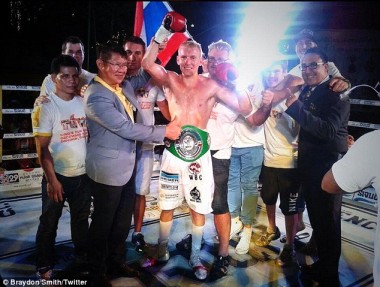 Medical officials from Senior Queensland have announced they wish to bring forth a request to ban boxing in Australia as a local fighter lost his life early this month after a fight.  Braydon Smith, a fighter from Australia, lost a WBC Asian Boxing Council continental featherweight title bout to Filipino John Moralde, unanimously.  After the fight in Toowoomba, Braydon Smith collapsed in the dressing room and was immediately rushed to the hospital where he was placed in an induced coma.  He never regained consciousness, and his life support had to be eventually turned off at the Brisbane hospital where he passed due to the brain trauma sustained during the fight.

Smith, only 23, had been enrolled as a law student, but hadn’t yet lost a single fight, harboring hopes of possibly progressing in the sport.  A representative of the Smith family said that Braydon wanted to show that boxing didn’t necessarily need to be considered as dangerous as people feared.

“He really wanted to change the image of boxing,” James O’Shea told AAP on Monday. “A lot of times in this country the sport gets a bad rap. A big goal of his in life was to show people it’s not (a bad sport).”

Shaun Rudd, president of the Australian Medical Association Queensland, believes tragic examples like this only exemplify why the sport should be banned in all of Australia.

“We believe that a so-called sport where two people knock each other in the head as often as you possibly can to win a bout seems rather barbaric,” he told ABC on Monday. “You’re not allowed to hit the organs beneath the belt whereas you’re allowed to hit the organ above your shoulder which is the most important organ in the body.”

This accident will only strengthen the vitriol boxing faces in the country.  When a promising, young boxer dies so suddenly, perhaps there should be more awareness concerning the safety concerns of the sport.  Certainly, most boxers and fans are aware of the dangers of the sport, but there could possibly be more done to ensure the safety of the boxers.  Boxing Queensland president, Ann Tindall, released a statement about the incident.