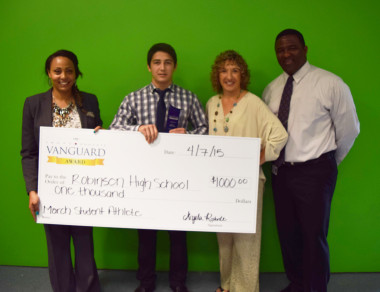 April 8th, 2015 (Tampa, FL) — The Swope, Rodante Vanguard Award Selection Board is pleased to share that Robinson High School junior Charles Heidt has been selected as the “March Student Athlete of the Month.” The mission of The Swope, Rodante Vanguard Award is to celebrate outstanding high school student athletes and coaches throughout Hillsborough County. Angela Rodante presented Charles with the award as well as a $1,000 check that was donated to the school’s athletic department on Tuesday, April 7th during a recording of the school’s morning show.

Captain of the wrestling team, Charles is a fierce but humble competitor. His wrestling coach, Thomas Montero, nominated Charles because he has left a positive impact on the team as a silent leader who is highly respected among his teammates and coaches.  As a result of his dedication, Thomas has improved his record to 45-15, placed in several tournaments, won the District Tournament and made it to the State Tournament this year.

In addition to excelling in wresting, Charles is enrolled in the vigorous International Baccalaureate program and maintains an outstanding GPA. He also finds time to give back to the community by volunteering more than three hours a week with THORN where he prepares meals and feeds the homeless.  After high school, Charles plans to attend a service academy.

Charles is a poised, well-rounded individual who embodies what it means to be a Swope, Rodante Vanguard Student Athlete of the Month.