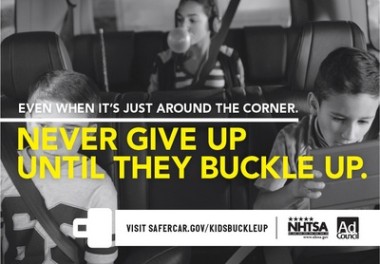 On March 12th, the US Department of Transportation’s National Highway Traffic Safety Administration (NHTSA) announced that they will be releasing a series of advertisements directed at parents of children years 8-14.  Although children this young are not yet getting behind the wheel, NHTSA believes it is important to remind parents that these children must be buckled up on the road.  Making sure children from 8-14 are consistently wearing seat belts correctly at all times provides the main concern for this ad campaign from NHTSA.

“Buckling up is an important habit to instill in children at a young age. As parents, we need to lead by example and reinforce the message to make sure it sticks,” said U.S. Transportation Secretary Anthony Foxx. “This campaign urges parents to never give up until their kids buckle up.”

A recent study from the NHTSA found that the parents sometimes neglect their children’s seat belt usage during the craze of the day, especially when driving back and forth rapidly between engagements.  Seat belt save lives and it takes only one freak moment for a car accident to change a life forever.  In addition, the conducted study shows that as kids age they become less likely to buckle up, especially when they start to become young teens.  Unfortunately, 1,522 children between the ages of 8 and 14 have died from injuries sustain during a car accident over the last 5 years, and more than half of them were not wearing a seat belt.  This does not take seat position into account.

“Kids will always test the limits with their parents or caregivers, but there is no room for compromise when it comes to wearing a seat belt,” said NHTSA Administrator Dr. Mark Rosekind. “Sounding like a broken record can save your child’s life. Kids need constant reminders and this is one that can’t be skipped.”

It is natural for children to test the limits as they grow older.  Yet, wearing a seat belt should never be something one takes a gamble on.  It is important to get into the habit of wearing a seat belt at all times, no matter the length of the trip.  Once done time and again, it will only be second nature to wait for the seat belts to be strapped before taking off.

The campaign, developed in both English and Spanish, includes television, radio, outdoor, print, and digital ads. The ads take a direct approach to parents, as one radio spot says, “You’re the driver. The one in control. Stand firm. Just wait. And move only when you hear the click that says they’re buckled in for the drive.”