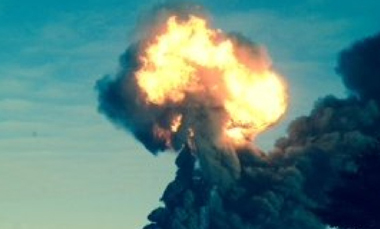 On Monday, December 30th, a collision between two trains in North Dakota caused one of the trains, a freight train carrying crude oil, to derail. The derailment triggered a fiery explosion, producing flames as high as 100 feet.

North Dakota sheriff’s deputies and local emergency crews responded to the derailment near Casselton, ND and found a scene with oil-carrying train burning, with up to 10 cars fully engulfed, according to Sheriff’s Sgt. Tara Morris.

“There was an explosion, where a car let loose and there was a giant fireball, hundreds of feet in the air. It’s burning very strong right now,” he added. “You can see the plume of smoke for 25 miles.”

The train collision occurred at a street intersection just before 2:20 p.m., where the trains’ tracks were running parallel just a few feet apart. A westbound BNSF train carrying grain derailed first and was then struck by an eastbound train carrying oil, according to Cecily Fong,  a public information officer with North Dakota Emergency Services.

Fong said the train carrying grain was approximately 111 cars long and crews were able to get the unaffected cars away from the burning wreckage. A code red alert was issued asking residents to stay indoors and Fong said the Federal Aviation Administration had placed flight restrictions on the greater Fargo area due to the smoke.