How are Cerebral Palsy and Brain Damage Linked? 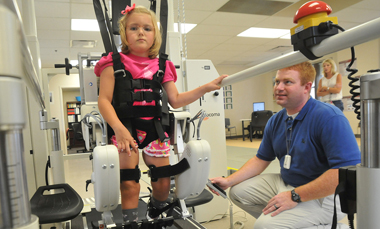 Cerebral Palsy, also known as CP, is defined as a physical disorder mainly affecting the body’s muscle functions, speech and motor skills. The term “cerebral” refers to the part of the brain controlling motor skills and movement, known as the cerebellum. The word “palsy” refers to a “disorder of movement”.” Cerebral palsy is a disorder that can be a direct result of brain damage or improper brain formation.  The majority of cerebral palsy cases are congenital, meaning that the brain damage linked to the disorder takes place immediately before, during, or after childbirth.  If the brain does not develop adequately in utero, or if an infant suffers a brain injury near or during childbirth, cerebral palsy can result.

Types of Brain Damage that can Cause Cerebral Palsy

The following list contains the primary causes or sets of conditions which can result in the onset of cerebral palsy:

Of the factors listed above, a lack of oxygen and physical brain trauma are conditions which tend to occur during delivery as a result of physical and environmental factors.  Obstetricians, the doctors responsible for childbirth and delivery, are sometimes held liable for improper procedures or negligence when this type of injury occurs. Often times, it may be difficult to determine if the obstetrician performed his/her role correctly during a delivery in which a brain injury occurred. For this reason, instances of lawsuits associated with childbirth injuries can be complicated and obstetrician malpractice insurance rates can be quite high when compared against insurance coverage rates applicable to other areas of medicine.

In comparison, damage to white matter, brain malformation, and brain hemorrhaging are primarily associated with some form of developmental abnormality that occurs while the fetus is still growing. It is important that expectant mothers receive proper medical care and checkups throughout the course of their pregnancy. During this time, prenatal testing may identify evidence of abnormal brain development and/or cerebral palsy prior to birth.  Such testing is essential to correctly identifying the cause of cerebral palsy in a child and can also help the parents to prepare for a special needs child.

Are there Different Types of cerebral palsy?

Four types of cerebral palsy, specific to the traits of the disorder, have been identified by the medical community:

Spastic cerebral palsy: This is the most common form. Spasticity, or muscle tightness (spasms and twitching) result from this condition.  This form often produces an inability to sit, stand, or walk as a result of severe muscle tone abnormalities and involuntary muscle contractions.

Ataxic cebral palsy: This form is less severe and uncommon when compared with Spastic CP. Motor skills and coordination may be impaired, but the person typically retains basic, yet limited physical capabilities.

Atheiod cerebral palsy: This form is also known as diskinetic CP and consists of some muscle spasticity coupled with low or abnormal muscle tone.  People with this form of CP may have trouble sitting or walking upright and sometimes experience involuntary muscle contractions.

Mixed cerebral palsy: This form is rare and contains a mix of symptoms of the previously listed types. Symptoms can be unpredictable and may vary in frequency and severity over a person’s lifetime.