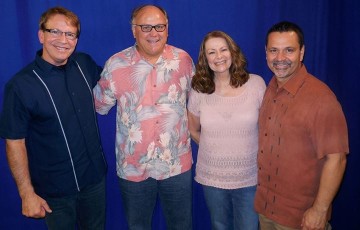 August 20, 2013 (Tampa, FL) — Swope, Rodante P.A. is proud to share that managing partner Dale Swope recently made a guest appearance on The Tampa Natives Show, a local television program which captures Tampa’s unique history through weekly episodes with special guests who are active within the community. An advocate for the preservation and restoration of Ybor City’s rich history and vibrant culture, Swope has initiated several community endeavors which have made a lasting impact. He was invited to appear on the show to discuss the history and restoration of the old Florida Brewing Company building located in historic Ybor City. The episode premiered live on July 11, 2013 and can be seen at http://www.tampanativesshow.com/OurPastShows.htm.

In 1999, Swope and general contractor Joe Kokolakis restored the severely dilapidated brewery building which was founded by business partners Vicente Ybor and Edward Manrara in 1896. In its prime, the Florida Brewing Company was hugely successful as the leading brewery on Florida’s west coast and the largest exporter of beer to Cuba in the U.S. Although it survived the Prohibition and the Great Depression, the embargo on Cuba and opening of the Anheuser-Busch factory in Tampa caused the brewery to shut down in 1961. Throughout the restoration process, Swope and Kokolakis focused on maintaining the historic landmark’s original design. In 2001, the firm known today as Swope, Rodante P.A. moved into the building which provides an efficient atmosphere and allows attorneys and staff to focus on clients’ needs.

The building now plays a vital role in the Tampa community as well. The firm invites members of the legal community preparing for trial to utilize its state of the art mock court room which features amenities like cameras, technical equipment, wireless internet access and conference rooms for breakout sessions. In addition, the firm’s conference rooms regularly provide a meeting location for local and political organizations.

About The Tampa Natives Show

Since its debut in 2008, The Tampa Natives Show has grown in popularity, becoming a household favorite within the Tampa area. The Tampa Natives Show celebrated its 100th live episode this past May. Hosted by an engaging trio: Steve Canella, Mario Nunez and Sally Nunez (known among fans as the “15 Minute Girl”) the program celebrates and educates viewers on the rich cultural history of Tampa.  Numerous local celebrities and public figures have appeared on previous broadcasts of The Tampa Natives Show, including Tampa-born baseball legend Lou Piniella; Richard Gonzmart, fourth-generation owner of Ybor City’s historic the Columbia Restaurant; Jack Espinosa. The Tampa Natives Show is broadcasted live every Thursday at 7 p.m. on the Tampa public-access channel TBCN (BrightHouse channel 950, Comcast channel 20 and Verizon channel 30).