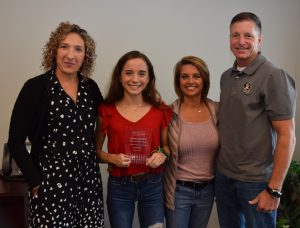 Congratulations to Alyssa Hendrix on being selected as December’s Swope Rodante Vanguard Award winner.  Swope, Rodante Managing Partner, Angela Rodante presented the award to Alyssa during a special ceremony attended by classmates, coaches, faculty, and Alyssa’s family on the last day of classes before winter break at Riverview High School.

A truly remarkable student athlete, Alyssa has earned a 3.98 unweighted and 6.14 weighted GPA, helping her to capture a class rank of 30 out of 647 classmates. An exceptional cross country and track & field athlete, Alyssa is a four time State Champion and has earned a total of ten State medals.

Alyssa embarked upon her high school career playing soccer. She only began running cross country during the off season in order to get in shape for the soccer season.  Yet Alyssa thrived at cross country her freshman year falling in love with the fact that it was an individual sport as well as a team sport. She earned 3rd place in the State her freshman year and soon thereafter stopped playing soccer in order to focus her energy on running full time.

Her Senior year, Alyssa ran at the Footlocker National Championships in San Diego coming in 15th place in Nation and earning the title of All American.

Not only is Alyssa a well-rounded student-athlete, she is also dedicated to giving back to our community. When she isn’t training for Track or Cross Country, she is studying for classes and involved with clubs and the community, including Key Club, College Club, NHS, and Metropolitan Ministries to name a few.

Upon graduating, Alyssa plans on attending North Carolina State University where she will run cross country and track & field 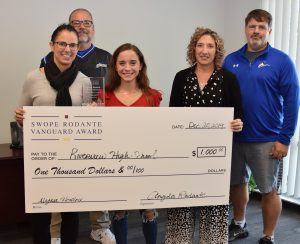