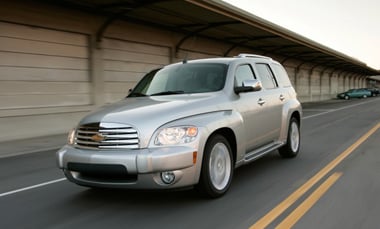 Back in 2011, the National Highway Transportation Authority (NHTSA) received several complaints about a potential design defect in the Chevy HHR (Heritage High Roof). Among the chief complaints, the Chevrolet HHR problems reportedly include difficulty turning the vehicle off. The ignition switch assembly and internal tumbler unit seem to stick or fails to disengage, preventing drivers from rotating the ignition key to the off position.

Chevy HHR complaints have been filed with the NHTSA by vehicle owners. Chevy Heritage High Roof owners have reported incurring high costs repairing the ignition assemblies and tumblers in their vehicles. Though initially reported in 2011, owners of used HHR vehicles have continued to see the problem surface. In February of 2012, one frustrated owner even posted a YouTube video, claiming the problem pointed to a seized ignition lock cylinder.

Many of the frustrated customers, a number of whom elected to have their vehicles towed to a dealership while still running, had been informed that the repair is not covered under their warranty. Those customers reported having paid as much as $600 to repair the HHR ignition.

Initially, the known model years affected by the ignition problem include the 2009 Chevy HHR and 2009 Chevy Cobalt. However, GM began sending out advisory letters to registered HHR and Cobalt owners asking them to contact their local dealership about replacing the ignition lock cylinder. This information was posted in a Chevy HHR forum by a customer in Nebraska who stated his vehicle was from the 2010 model year. Apparently, a service notice was sent out to certain owners of 2009 and 2010 Chevy HHRs and Cobalts for ignition replacement. The announcement was a special bulletin, meaning it was not a recall but a VIN specific campaign.

Chevrolet no longer manufactures either of the affected vehicles. The last model year for the HHR was 2011 and the last Cobalt was built in 2010.