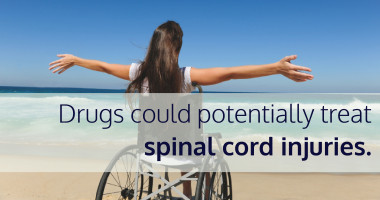 Depending on the severity of a spinal cord injury, a victim who suffers one of these infamously irreversible injuries will likely face an upward battle for the rest of his or her life.  Whether full or partial paralysis ensues the damage sustained to the spinal cord, there are very few instances where a victim completely regains motor functions.  The spinal cord hardly ever heals because the nerve cells surrounding the spinal cord fail to regenerate, due to the scar tissue that develops.  In addition the molecular intricacies inside the nerves hinder the process by blocking axon growth and, in turn, belays the ability for nerve regeneration.

Luckily, new research now indicates that a certain drug called epothilone, which is already licensed on the US market and has been used to treat some forms of cancer, could prove beneficial for victims of spinal cord injuries.  Epothilone has evinced the ability to reduce the pesky formation of scar tissue after injuries and has promoted growth in damaged nerve cells.  These experiments have only been conducted on animals, but nonetheless prove promising results.

“The ideal treatment for promoting axon regeneration after spinal cord injury would inhibit the formation of scar tissue,” researcher Frank Bradke at DZNE (German Center for Neurodegenerative Diseases) said in a statement. “However, it is also important that the growth-inhibiting factors are neutralized while reactivating the poor axons’ regenerative potential.”

With the help of previously conducted research, which found that stabilizing microtubules, tubular filaments inside the cell, reduces the formation of scar tissue and propagates axonal growth, Bradke and his team of scientists were able to create their new treatment.  The microtubules control cell movement and growth, and by administering epothilone, the microtubules become stabilized.

“It all depends on the dose,” noted Dr. Jörg Ruschel, the study’s lead author. “In higher doses, epothilone inhibits the growth of cancer cells, while low doses have been shown to stimulate axonal growth in animals without the severe side-effects of cancer treatment.”

It turns out that epothilone proves to be so effective because it penetrates the blood-brain barrier in the central nervous system.  This allows the epothilone to reach the damaged axons directly.  Bradke and his team are currently experimenting with the effects of epothilone and plan on confronting a wider variety of issues.  Hopefully, their work, which is already promising, will help solve some confounding problems such as spinal cord injuries.