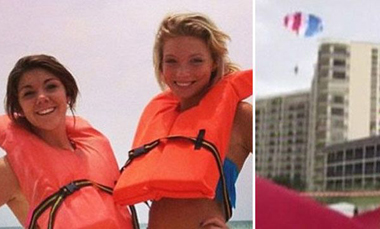 Two Indiana teenagers have recovered enough from a July 1 parasailing accident off the coast of Panama City, Florida, to return to their home state, a July 15 Associated Press report shows.

What might have started off as a fun adventure for two teenage friends: Alexis Fairchild and Sidney Good, both 17, parasailing over the Gulf of Mexico in a tandem harness turned to chaos when a rope broke from the boat, sending them flying out of control into power lines, buildings and parked vehicles.

“These winds kept the chute aloft and several attempts to winch the riders back onto the vessel failed. The anchor was set to keep the boat from being pulled onto shore. The towline detached and the riders were helpless to control the chute,” an FWC news release states.

The teenagers were admitted to Bay Medical-Sacred Heart in Panama City in critical condition. Both girls underwent brain surgery on the night of the incident, according to a Wane.com news report.

A Fort Wayne trauma surgeon, Donald Reed Jr., M.D. spoke to NewsChannel 15 in the report which is online at Wane.com about his own cases of traumatic injuries in similar parasailing accidents. He told the news station that the first thing he looks at are the vessels in a patient’s chest: “Your aorta, that carries the blood supply out of your heart to the rest of your body, when you have a deceleration injury, that’s probably the number one cause of death right there is an injury to that vessel.”

The next most immediate risk is a head injury: “If they’re appropriately diagnosed and treated, that they often survive and have a normal life. Whereas, with a closed head injury they can immediately survive, but the long term consequences or outcomes are much more serious,” Reed told NewsChannel 15.

Fairchild suffered a broken back and head trauma, but by July 11, she had improved enough to be released from the hospital and return home where she will continue rehabilitation at a hospital there.

On July 14, a few days after Fairchild was released, the family of Good said that she was now also released from the hospital in Panama City, Fla. and flew to Indianapolis, according to an Associated Press report. Good was able to stand up and walk for the first time since her parasailing accident on  Saturday, July 13, according to a statement her family released that was reported on Wane.com.

Aquatic Adventures, the company that owned the boat involved in the incident released the following statement: “The events of July 1, 2013 were tragic. Our heartfelt sympathies go out to the families of the injured girls and we all pray for their speedy recovery. . . While we adhere to best practices to minimize risks associated with watersport activities, sudden weather conditions can and do occur. As a full investigation is ongoing, we are unable to comment further at this time.”

This accident brought to light an industry that has “surprisingly little regulation,” ABC News reported. Since 1998 there have been 33 parasailing accidents in Florida alone, six of which resulted in fatalities.

Florida State Senator Maria Sachs told ABC News that there are currently no specific regulations for parasailing in Florida, and she won’t stop until a bill is passed to change that. Boaters only need to follow the Coast Guard’s rules of having a safe water craft and a captain’s license. Two months ago, a bill died in the Florida House that would have put strict regulation on parasailing, including requiring insurance, ensuring safe weather conditions, and regulations on the parasailing equipment.

Parasail Safety Council’s figures over a 30-year-period from 1982 through Sept. 2012 show:

Our firm at Swope, Rodante P.A. is experienced in handling catastrophic personal injury, product liability, and wrongful death cases. If you have been seriously injured in an accident due to another person’s neglect or a faulty product or a loved one has suffered a wrongful death, please contact us.