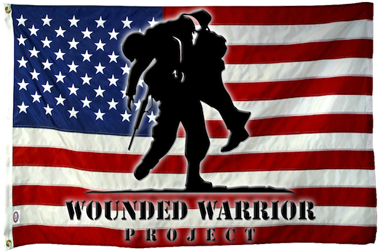 The Wounded Warrior Project (WWP) is a not for profit, veterans’ service organization that provides a variety of programs, services and events for veterans of all branches of the military wounded in action following the events of 9/11/2001.

Wounded Warrior Project has existed since 2003, founded by John Melia in Roanoke, Virginia. In 2006, the organization had grown was moved to its current headquarters in Jacksonville, Florida. Melia recounts his own service-connected injury experience that inspired him to form WWP:

“I was a Marine in the early ’90s, and I was injured in a Marine Corps helicopter crash that killed four of my friends and injured 14 of us. So my experience coming home as a wounded vet kind of showed me some of the gaps in service delivery to [wounded] military members. In 2002, I was watching a news story on TV and saw a young Marine being loaded onto a helicopter, and it just brought back a flood of memories for me and I thought, “Boy, I bet that guy’s getting ready to go on the same type of journey that I did for a number of years, struggling to figure out what I was going to do after I was retired from the military.”

“…nearly $5 million in grants to other charities, including the American Red Cross and Resounding Joy, a music therapy group in California, and also provided about $880,000 to nearly 100 veterans in the form of college scholarships and stipends for its year-long TRACK Program, which helps veterans transition to college and the workplace.”

Wounded Warrior Project has also partnered with similar organizations, such as Operation Homefront, who work to provide emergency financial assistance to military service members and veterans who suffered a debilitating physical or mental injury, illness, or wound in connection with military service in the war against terrorism. WWP spokespersons explain that emergency assistance is provided in the form of cash grants paid directly to service and utility providers to cover service members’ most basic of needs, including food and housing.