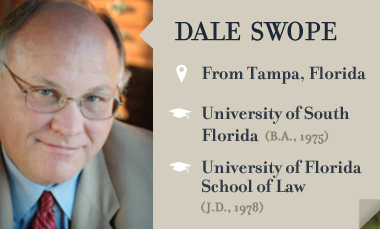 August 2, 2013 (Tampa, FL) — Swope, Rodante P.A. is thrilled to announce that this is the 20th consecutive year managing partner Dale Swope has been honored with an AV® Preeminent™ Peer Review Rating from Martindale Hubbell in recognition of his ethical standards and proficiency.  This is the highest rating an attorney can receive from the organization which has been a trustworthy source for over 130 years for those seeking legal experts.

Swope is a distinguished civil litigation attorney who founded Swope Rodante in 1979. He has dedicated his career to guiding and protecting clients who have been catastrophically injured and those who have been mistreated by large insurance companies. His professional achievements and lasting impact in the legal industry have also been recognized through numerous top honors. Swope is listed as a Best Lawyer in America by Best Lawyers, has a ‘Superb’ rating by AVVO.com, is included as a Super Lawyer by Super Lawyers magazine and is recognized as a Top Rated Lawyer in Insurance Law by Martindale Hubbell and American Lawyer Media.