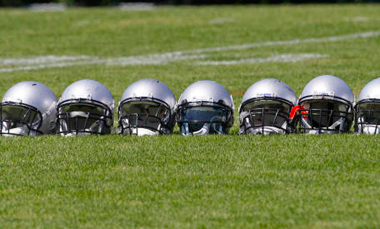 Concussions, nerve damage, and other brain injuries have been a recent, ongoing focus and a priority in the development of more protective football helmets. Over the decades, both the immediate and long-term effects of brain injuries resulting from collisions and blows to the head have taken center stage in the NFL and the game of football at large. The recent availability of new types of collision data has helped equipment designers to make tremendous strides in the advances of the protective materials inside of football helmets. Newly designed systems, coupled with improvements in shock absorbing materials, offer new degrees of protection against head trauma and injuries to the brain.

Brain Injuries and Concussions in the NFL

Concussion injuries are reported regularly each year throughout the NFL season. Due to the physical nature of the sport, this type of brain injury is commonplace.  More recently, however, researchers have begun uncovering the long-term effects of multiple concussions on retired players who have been out of the game for quite some time.

Web MD defines a concussion as “A type of traumatic brain injury that is caused by a blow to the head or body, a fall, or another injury that jars or shakes the brain inside the skull.” Most times, concussions show little or no visible signs, while in more severe cases, concussion symptoms can include confusion, disorientation, lack of balance, and memory loss. In some cases, these symptoms may be experienced immediately following the injury or may not appear until days or even weeks later.

In recent years, brain injuries and concussions in the NFL have sparked a congressional inquiry. Recent research has further dissected the mechanics of a concussion. As a result, the NFL has been reluctant to endorse the use of any particular helmet or any claims of injury prevention by the helmet manufacturers.  Nevertheless, modern efforts to reduce the risk of brain injury have been amplified in recent years and show promising signs of improvement.  New discoveries and improved game-play analytics have found that a glancing or angular, rotational blow can cause the brain to actually torque or “spiral” inside the cerebrospinal fluid that sits between it and the inside surface of the skull.

This particular discovery provides evidence that a concussion can take place or be worsened by this type of spiraling motion.  As a result, concussion research and helmet testing have been forced to reassess their standards in order to account for these types of forces. In the past, research and testing focused primarily on direct, linear blows to the head and did not properly account for this dynamic.

Improvements in Testing and Helmet Technology

In modern football helmets, the implementation of air (inflation) based systems, coupled with foam and gel inserts, have helped to reduce the amount of energy transmitted to a player’s skull. Considerable research is still needed, but the general consensus seems to be that severe concussions have the potential to cause life-altering injuries and that better technology to minimize or prevent these injuries is needed to effectively protect football players. While no helmet system can fully prevent brain injuries, new approaches in energy absorption, resulting from the aforementioned, newly discovered data; aim to reduce that overall risk as much as possible.

In 2003, a New Hampshire–based company launched a research tool called the Head Impact Telemetry System (HITS).  This tool helps to test the impact of rotational acceleration, or the “spiraling” effect that extreme, angular blows can have on concussions, and can analyze movement and impact during actual game-play.  The development of this test allowed helmet designers to build and test new devices and materials to help protect against this type of impact (in addition to direct blows).

Safety equipment maker Bill Simpson, with the aid of data provided by HITS, successfully launched an innovative new helmet system in late 2012. The multi-directional impact system (MIPS) is essentially a series of straps coupled with a sliding gel insert underneath protective foam within the helmet.  Should the player receive an angular, spiraling blow to the head, the gel insert absorbs much of the impact by slightly rotating and mimicking the behavior of the brain under the same type of torsion in the skull.

The system, though still under research, has been met with much anticipated success. The helmet absorbs much of the energy so that the brain does not have to, thus further reducing the risk of injury. While brain injury prevention in professional football still remains elusive, new data about concussions and an increased focus on player safety has the potential to better protect players in the NFL.